Bereavement Care for Veterans and Their Families

Sometimes, military culture can complicate the grieving process for the families of veterans who have died. This article by Pat McGuire explores those challenges.

Bereavement Care for Veterans and Their Families

Veterans Need to Mourn the Deaths of Their Comrades
The source of the gaping hole in our society caused by the aftermath of war is unmourned loss and unforgiven guilt/shame from the deaths of comrades killed in war. The hole this leaves in surviving comrades’ hearts continues to exert its influence throughout their lives until the deaths are acknowledged, honored, mourned, and redeemed. We believe that our civilian society has a responsibility to help heal the Soul Injuries of our nation after war. Soul Injury ceremonies can help restore wholeness to our broken nation; we struggle together to heal the wounds of war.
Opus Peace has developed a Fallen Comrades Ceremony. The resultant service can be a model for other organizations to provide so that our nation can be healed of this gaping wound. If you would like to help heal our nation of the aftermath of war, please consider sponsoring a community event that invites combat veterans to come mourn their fallen brethren. Contact us and we will come help you. Don’t miss this opportunity to heal the aftermath of war in your community. Throughout the United States, there are Fallen Comrades ceremonies taking place. These can be healing to both veterans and their families.
Most VA Medical Centers offer memorial services honoring the veterans who died in their facility annually. These services should be formatted in a ritualized ceremony that acknowledge and promote effective grieving and the ceremony should have a military context. Many VAs provide bereavement ceremonies or events to provide support for the veterans and their families for Memorial Day, Veterans Day, Fourth of July, and other holidays. Community hospices and other long-term care facilities should be encouraged to participate in these events or to hold their own veteran-centric programs.

Active-duty Deaths
The military culture influences both veterans and their families. They may face issues that do not impact the general population. This is also true of veterans and families of loved ones dying on active duty; however, hospice services are not provided to families prior to an active military death. Bereavement care to the surviving family members should follow the above guidelines coupled with standard bereavement guidelines that focus on sudden and violent death.
There are two organizations that are uniquely equipped to provide bereavement counseling and support to active duty personnel, their families, and extended families: Vet Centers and Tragedy Assistance Program for Survivors (TAPS). Vet Centers provide individual, group, and family counseling to all veterans who served in any combat zone. Services are also available for their family members. TAPS is a national non-profit organization that offers extensive peer-to-peer support and education about traumatic death and the active duty military’s specific grief needs. Some hospices partner with these agencies to provide services. Other hospices partner with the Red Cross to offer bereavement services for active military deaths. It is important that Hospice staff receive specialized training in order to perform this task.

You can receive free pamphlets from your closest Dignity Memorial funeral home. Use them to educate Veterans’ families. You can also download the pamphlets below by clicking on them. 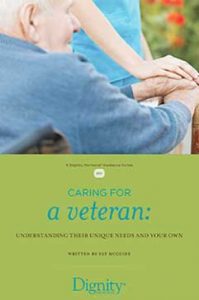 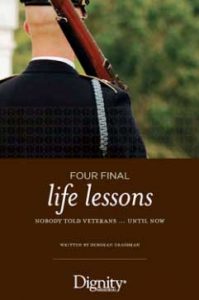 As we age, we complete the tasks of individuation; we start letting go of our sole self and gradually start opening up to our soul self.

Other concepts about aging like this one are in Deborah Grassman’s book, The Hero Within: Redeeming the Destiny We Were Born to Fulfill. 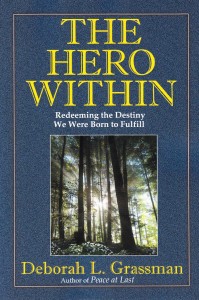 A View from the Window

A few years ago, she might have thought the scene from this window unremarkable. Not so now. She was different now…and so was everything else.

A View from the Window

She gazed out onto the stillness of a landscape broken only by the strong breeze blowing off the lake through the towering pines. Opening the wooden window with difficulty, she shimmied it up from one side to the other, splintered paint curls stabbing her finger pads. The fresh air was a welcome replacement for the stale cardboard perfume that permeated the room. The echoing sound of a distant woodpecker gave her resolve to embark on the task before her. It would start with ripping the window shade from its anchorment – except its brittleness caused it to disintegrate in her hands.

It would be a long day – probably an even longer summer. Yet, she knew it had to be done. She had put it off too long already. Working would take her mind off all that had happened in the past three years. Here, she could escape from the penetrating loneliness that only separation by the death of her beloved mother could bring. Here, she would remodel the home where she, herself, had been raised.

She was determined to chisel away at her list of repairs, yet her furiously-paced work was tempered with long pauses… expanded moments of contracted hours… gazing out this window. Not that she planned these reprieves…in fact, mostly she felt them an intrusion – robbing her time and her mind from needed tasks…and often leaving her feeling guilty for the work that could have been accomplished. It was the kind of guilt that made her reluctant to acknowledge the welcome emptiness these moments enjoined.

A few years ago, she might have thought the scene from this window unremarkable. Not so now. She was different now…and so was everything else. Four years ago, she would have inwardly felt smooth and easy peering at this view. Now, she felt rough and jittery…like an old cob with its corn popping to all the ends of the earth.

The road winding from the street, around the house, and back toward the lake caught her attention. It wasn’t exactly a road…more like two paths joining everywhere to nowhere…paralleling ruts connecting perpendiculars. Connecting everything beyond nothing… The tractor that carved out those parallels had not bounced along this dusty trail for years, yet the grass and the weeds failed to grow in its vacant spaces. She recalled those tractor wheels with a bemusing smile. Giant tires, larger than she was tall – even with her arms outstretched over her head. The criss-crossed treads stood out so far they could be used as handles to climb to the top – that is if it wasn’t too hot. Black rubber sizzles summer hide no matter how fast she could scamper up its massive rounded height.

Two parallel ruts in the grass…that’s all that was left. If she strained hard enough, she could squintingly see the hard ridges of the tractor wheels still etched in the hard, yellow clay. Weather had worn down the high points of the ridges made by the tread. Ridges that she used to love feel dry and crumble beneath her feet…sometimes crumble even without the aid of her feet. Ridge tops that would harden and dry even while the deep pockets made from the tread stayed soft and mushy, cool, moist and muddy. She had always thought these pockets surprisingly crisp and distinctive…always thought they would have made perfect plaster molds of castings for who knows what…maybe for the cast she might need when she turned her ankle because her foot didn’t quite conform to the angles and holes left by tractor treads.
“I’ll walk that road before I go back home,” she thought with determination. But that would have to wait until tomorrow…and she’d stay on the soft level mound of grass between the ruts. No twisted ankles for her. For now, there was work to be done – but maybe not as much as she originally planned.

You can read stories like this one in Deborah Grassman’s book, The Hero Within: Redeeming the Destiny We Were Born to Fulfill.

After a Veteran Dies – Florida Residents

Things to consider after a Veteran Dies.

After a Veteran Dies – Florida Residents

THE FUNERAL – Your first decision may be the most difficult: burial or cremation. Local funeral homes offer both services. Choose your own funeral home or cremation company. They will help you with all the details, such as viewing, religious service, obituary, funeral notice, pallbearers, flowers, music, and shipping, if desired.

NATIONAL CEMETERIES IN FLORIDA – Go to www.cem.va.gov to locate the closest national cemetery to you.

VA BURIAL BENEFITS – Contact VA Regional Office at (800) 827-1000. Note: Additional death benefits may be available for survivors. Questions about eligibility should be made through the VA Regional Office or a County Veteran’s Service Officer.

CERTIFIED COPIES OF DEATH CERTIFICATES – Copies of the death certificates are usually available within a week to ten days following a death. Your funeral director will advise you on how many to order and will obtain them for you. You may also obtain them from the Health Dept. of Vital Statistics, 4175 East Bay Drive, Largo, FL 33764, (727) 507-4330 ext. 1200. You will need a death certificate for cars, residences, mobile homes (double-wide requires two), stocks and bonds, etc., private pensions, VA insurance (2), and bank accounts (some will accept a certified copy).

SOCIAL SECURITY ADMINISTRATION – Your funeral director should notify Social Security of the death. Death benefits from Social Security are payable to the surviving spouse or dependent children ONLY.

BENEFITS FOR SURVIVORS OF VETERANS

Benefit eligibility for survivors of Veterans is evaluated on a case-by-case basis. However, family members who usually are eligible for benefits include spouses, children, and in some cases, parents. A surviving spouse remains eligible for most monetary survivor benefits as long as they remain unmarried, or remarry after the age of 57. Children may be eligible for monetary benefits until age 18, or 23 if they are attending an approved school. Also, disabled surviving children may be eligible for long-term benefits. Call 800-827-1000 or go to www.vba.va.gov/survivors.

WILLS, POWER OF ATTORNEY, GUARDIANS, PERSONAL REPRESENTATIVE – Power of Attorney and Guardianship cease at the time of death. If there is a will, the personal representative will be in charge of funeral arrangements. Contact your attorney for advice.

INSURANCE – You can now call toll-free if you have any questions or need any service performed on your VA insurance policy. Call 800-669-8477. All insurance companies require a certified copy of the Death Certificate.

SAFE DEPOSIT BOX – Safe Deposit Boxes may be examined by anyone whose name and signature appear on the signature card. You may remove any or all items from the box. If you are not on the authorized signature card, you will need a Court Order to open the box.

VA-ISSUED PROSTHETIC EQUIPMENT – Prosthetic devices such as hearing aids, wheelchairs and hospital beds are issued to our Veterans. To arrange for pickup of equipment, call the hospital’s Prosthetic Department.

DONATION OF REMAINS TO SCIENCE– In Florida, remains may be donated to the State Anatomical Board for medical/dental research purposes. VA Burial Benefits may be applied to the cost of required arterial embalming and transportation of the remains to either the Univ. of Florida, Gainesville, or the University of Miami in Coral Gables, FL.

You can receive free pamphlets from your closest Dignity Memorial funeral home. Use them to educate Veterans’ families. You can also download the pamphlets below by clicking on them.